Joann was born in Glasgow, Scotland and formed an interest in music and the works of Scotland’s internationally renowned poet, Robert Burns, at a very early age. She entered, and won, her first Burns Competition at the age of five and continued to compete in music festivals and competitions. During her competitive years, Joann was a consistent prize winner in classical and traditional music genres and was awarded trophies both for excellence in singing and for her interpretations of Burns’ works and other Celtic music.

In addition to her Burns studies, she also began vocal training in the classical Italian style when she was eight years old. Joann has performed the major works of the classical repertoire with many of the world’s leading orchestras and conductors throughout Europe and has a special place in her heart for the music of the Baroque Period, Mozart and Deutsche Lieder.

Her genuine love and admiration of the works of Robert Burns comes across in her unique interpretation and sensitive musical arrangements of his words and she is keen to ensure that his poetry is appreciated and enjoyed far outside their native land. Her performances and recordings reflect her experience and training in both the traditional and classical styles of music.

Joann was awarded Honorary Membership of the Saint Andrew Society of Southern California in June 1997 in recognition of the unique and outstanding contribution she has made, and is continuing to make, to the furtherance of Scotland’s culture and history here in the United States.

In contrast to her musical endeavors, Joann is also a martial arts enthusiast and has been featured in several sports publications.

Joann has written several children's books featuring the mischievous tyke, Wee Billy - a character she admits is based on herself since she was a bit of a tomboy growing up and always seemed to be getting into scrapes! She is in demand at schools and children's groups to read her stories and talk with her young audiences about the differences of growing up in Scotland and the USA.

She has also penned an autobiographical account of her childhood. "A Girl From Glasgow - Growing Up In The Tenements" takes the reader into an unfiltered account of daily tenement life and her early interest in opera - two things that do not normally go together!

She currently splits her time between her adopted and native lands. In addition to performing, writing and recording, she is involved in producing educational materials, speaking at seminars and workshops to promote the arts, traditions and culture of Scotland and also plays an active role in animal rescue on both sides of the pond.

The welfare of our troops is very important to Joann and she organizes and performs in fund raising concerts to benefit injured veterans and their families. 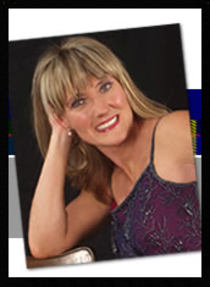