"With the freshness of heather, Joann brings a unique and versatile talent to Scottish music. She blends traditional with contemporary sounds in a way that sets her apart from any other Scottish performers."
--Christopher Lamberton F.S.A. Scot
Past President of the Saint Andrew Society of Southern California

"As the President and Games Manager of the Tucson Celtic Festival Association, it has been my pleasure to have worked with Joann at our Festival the last two years. Joann has performed at our Torch Light Ceremony and on the main stage during the Festival. The Tucson audience always enjoys her music, and her style of presentation of old and new Celtic Music. In our review we do with our guests, we have always received good comments on her performance and requests for her return. Joann has always been easy to work with, willing to perform at any time we have scheduled her, and willing to help out in other parts of the entertainment. The Tucson Celtic Festival and myself recommend Joann as an excellent entertainer and a valuable part for your Games."
--Joseph Eldridge
President and Games Manager
Tucson Celtic Festival 1999

"I have worked with Joann for the past two years on the Celtic Lands Faire event that we produce. In our first year, Joann was one of the featured artists in the Celtic Lands Review. In the second year, I asked her, in addition to performing in the Review, to coordinate the outside entertainment, which involved contracting with and scheduling many performers over the two-day event. She did this in a most professional manner and I was very pleased with all of her efforts in assisting us. She is a wonderful, warm performer with a great repertoire of Scottish songs and has built up a good network with other musicians and performers. I can highly recommend Joann and her Glasgow Girl Enterprises to do a top notch job in whatever she undertakes."
--Andrew C.Voth
President, Arts Alliance of Ventura County
Director, Celtic Lands Faire

Critique from “The Reed and Chanter” Magazine:
"Born in Scotland and now living in California, Joann has been singing since a small child. She is an ardent admirer of Robert Burns' work, and takes great care to interpret his songs with the sensitivity they deserve. Her soprano voice is very sweet and clear, and the musical arrangements quite lively."
--Marilyn O’Malley
"Joann is Southern California’s Scottish song bird. Classically trained, the ease with which she pours herself into lilting Scots melodies entrances her audience. She willingly and generously gives herself to her fans in the local community and is well loved for her contribution to the Saint Andrew Society, the Los Angeles Burns Club and other Scottish events. We are blessed that she has started recording her work, for far too often such talent can slip away without any permanent archive. Joann is a delight to work with. Professional and uncomplicated."
--Neil Stewart McLeod FSA Scot.
Founding President of the Los Angeles Burns Club

"I have had the pleasure of engaging Joann for several Scottish events for which I was responsible for the entertainment.
Joann was, in every case, thouroughly professional and enjoyable to work with. Best of all, each audience was entranced by her voice and her presence. If your group is lucky enough to find an open date on her schedule - book her today!"
--Duncan Murray
Past President, the St Andrew Foundation of Southern California
Past President, Clan Donnachaidh Association of Southern California. 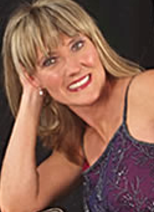